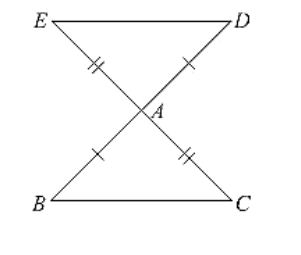 
Given that, the sides BA and CA have been produced such that BA = AD and CA = AE and given to prove DE ∥ BC Consider triangle BAC and DAE,

So, by SAS congruence criterion, we have

Now, DE and BC are two lines intersected by a transversal DB such that ∠DEA = ∠BCA i.e..  alternate angles are equal Therefore, DE, BC ∥ BC.