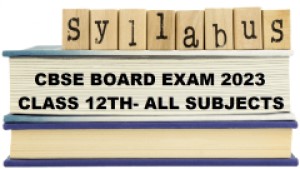 Below you will find the Class 12th Syllabus 2022-2023 along with the Practical and assessment syllabus and marks which will help you to give your best in the exam.

Chapter–2: Electrostatic Potential and Capacitance:
Electric potential, potential difference, electric potential due to a point charge, a dipole and system of charges; equipotential surfaces, electrical potential energy of a system of two-point charges and of electric dipole in an electrostatic field.
Conductors and insulators, free charges and bound charges inside a conductor. Dielectrics and electric polarization, capacitors and capacitance, the combination of capacitors in series and in parallel, the capacitance of a parallel plate capacitor with and without dielectric medium between the plates, energy stored in a capacitor (no derivation, formulae only).

Note: For activities NCERT Lab Manual may be referred.

Unit-IX Biotechnology and its Applications

For your best preparations, you can refer Previous Year question Papers, that will help you to know the paper pattern and enhance your speed