Hey, Do you want to learn about the first law of thermodynamics in physics? If yes. Then you are at the right place.

The first law of thermodynamics

Then the dQ1 – dW1 = dQ2 – dW2. Difference of heat absorbed by the system dQ and work done by the system dW i.e. dQ – dW does not depends on path in between two definite states of the system.

Both dQ and dW depend on the thermodynamic path taken between two equilibrium states, their difference dQ – dW does not.
So, there is a function (internal energy) of the thermodynamic coordinates (P, V and T) whose final value (Uf) minus its initial value (Ui) equals the change dQ – dW in the process. 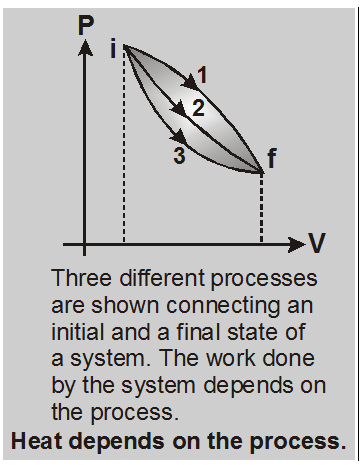 Hence $\mathbf{d} \mathbf{U}=\delta \mathbf{Q}-\delta \mathbf{W}$
This equn. is known as the first law of thermodynamics.
Change in internal energy dU = Uf – Ui does not depends on path it depends only on initial and final positions of the system. So, it is denoted by dU, but heat supplied to the system and work done by the system are path dependent so they are denoted by dQ and dW respectively.


Limitations of First Law of Thermodynamics:

Significance : The first law of thermodynamics tells us that it is impossible to get work from any machine without giving it an equivalent amount of energy.

Application of first law of thermodynamics in physics

When a substance melts, the change in volume (dV) is very small and can, therefore, be neglected. The temperature of a substance remains unchanged during melting process.
Let us consider the melting of a mass m of the solid. Let L be the latent heat of fusion i.e., the heat required to change a unit mass of a solid to liquid phase at constant temperature.
Heat absorbed during melting process, $\delta \mathrm{Q}=\mathrm{mL}$
According to the first law of thermodynamics,
$\delta Q=d U+\delta W$
Or $\mathrm{mL}=\mathrm{dU}$ $[\because \delta W=P \delta V=P \times 0=0]$
So, the internal energy increases by mL during the melting process.

When a liquid is heated, it changes into vapour at constant temperature (called boiling point) and pressure. When water is heated at normal atmospheric pressure, it boils at 100°C. The temperature remains unchanged during the boiling process.
Let us consider the vaporisation of liquid of mass m. Let Vl and Vv be the volume of the liquid and vapours respectively.
Then, the work done in expanding at constant temperature and pressure P,
$\delta W=P \delta V=P\left(V_{v}-V_{\ell}\right)$
Let L be the latent heat of vaporisation, i.e., the heat required to change a unit mass of a liquid to vapour phase at constant temperature and pressure.
\ Heat absorbed during boiling process, dQ = mL
Let Ul and Uv be the internal energies of the liquid and vapours respectively.
Change in internal energy, dU = Uv – Ul
According to the first law of thermodynamics,
$\delta Q=d U+\delta W$
$\therefore \quad \mathrm{mL}=\left(\mathrm{U}_{\mathrm{v}}-\mathrm{U}_{\ell}\right)+\mathrm{P}\left(\mathrm{V}_{\mathrm{v}}-\mathrm{V}_{\ell}\right)$
Or $U_{v}-U_{\ell}=m L-P\left(V_{v}-V_{\ell}\right)$
Knowing all the quantities on right hand side, we can calculate the gain in the internal energy.