Outline salient features of carbon cycling in an ecosystem

Outline salient features of carbon cycling in an ecosystem


The carbon cycle is an important gaseous cycle which has its reservoir pool in the atmosphere. All living organisms contain carbon as a major body constituent. Carbon is a fundamental element found in all living forms. All biomolecules such as carbohydrates, lipids, and proteins required for life processes are made of carbon. Carbon is incorporated into living forms through a fundamental process called ‘photosynthesis’. Photosynthesis uses sunlight and atmospheric carbon dioxide to produce a carbon compound called ‘glucose’. This glucose molecule is utilized by other living organisms. Thus, atmospheric carbon is incorporated in living forms. Now, it is necessary to recycle this absorbed carbon dioxide back into the atmosphere to complete the cycle. There are various processes by which carbon is recycled back into the atmosphere in the form of carbon dioxide gas. The process of respiration breaks down glucose molecules to produce carbon dioxide gas. The process of decomposition also releases carbon dioxide from dead bodies of plants and animals into the atmosphere. Combustion of fuels, industrialization, deforestation, volcanic eruptions, and forest fires act as other major sources of carbon dioxide. 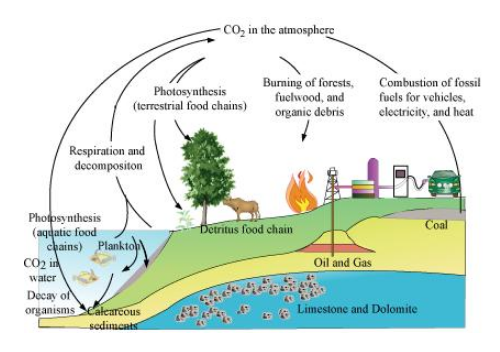