represents a crystal unit of cesium chloride, CsCl. The cesium atoms, represented by open circles are situated at the corners of a cube of side 0.40 nm, whereas a Cl atom is situated at the centre of the cube. The Cs atoms are deficient in one electron while the Cl atom carries an excess electron. 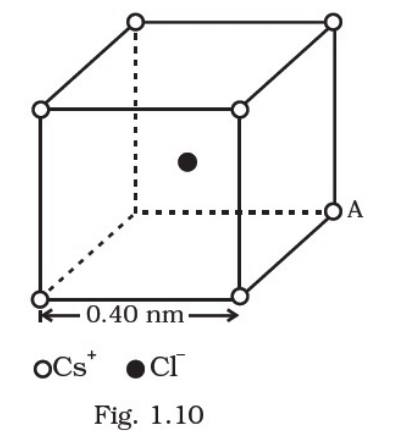 (i) What is the net electric field on the Cl atom due to eight Cs atoms?

(ii) Suppose that the Cs atom at the corner A is missing. What is the net force now on the Cl atom due to seven remaining Cs atoms?

(ii) In the given question, removing Cs atom at the corner A is equivalent to adding a singly charged negative Cs ion at point A.

Applying Pythagoras theorem, we have

The direction of force is from A to Cl‒