Hey do you want to learn about the applications of impulse? If so, Then you are at the right place

It is not convenient to measure the varying force of impact. Suppose that $\overrightarrow{\mathrm{F}}$ av is the average force acting during impact and $t$ is the small-time for which the impact lasts.

In such situations, it is found that the quantity Fav. It is very easy to measure.

The integral $\int_{0}^{t} \overrightarrow{\mathrm{F}} \mathrm{dt}$ is measure of the impulse, when the force of impact acts on the body and from equation, we find that it is equal to total change in momentum of the body.

Applications of Concept of Impulse :

(a) Bogies of a train are provided with buffers: The buffers increase the time interval of jerks during shunting and hence reduce the force with which the bogies pull each other. $(\because \mathrm{F} \Delta \mathrm{t}=\mathrm{constant})$

(b) A cricket player draws his hands back while catching a ball: The drawing back of hands increases time interval and hence reduces force with which the ball hits the hand.

(c) A person jumping on a hard cement floor receives more injuries than a person jumping on a muddy or sandy road: Because on the hard cemented floor the feet of the man immediately comes to rest and the time is small, therefore, the force experienced by the man is large while on the sandy soil the feet embedes into the soil, thus the time taken for same change in momentum is comparatively increased. Thus the force is decreased.

(d) Cars, buses, trucks, bogies of the train, etc are provided with a spring system to avoid severe jerks. Due to the spring system, the time interval of the jerks increases. As the rate of change of momentum will be smaller, comparatively lesser force acts on the passengers during the jerks. So, that's all from this article. I hope you get the idea about the applications of impulse. If you found this article helpful then please share it with your friends. If you have any confusion related to this topic then feel free to ask in the comments section down below.

Ex. A hammer weighing $2.5 \mathrm{kg}$ moving with a speed of $1 \mathrm{m} / \mathrm{s}$ strikes the head of a nail driving it $10 \mathrm{cm}$ into the wall. What is the acceleration during impact and the impulse imparted to wall.

Impulse imparted to wall = - change in momentum of hammer

Area of the graph gives the magnitude of the Impulse.

Ex. $\quad$ A force exert an impulse I on a body changing its speed from u to v. The force and object's motion are along the same line. Show that the work done by the force is $\frac{\mathrm{I}(\mathrm{u}+\mathrm{v})}{2}$. 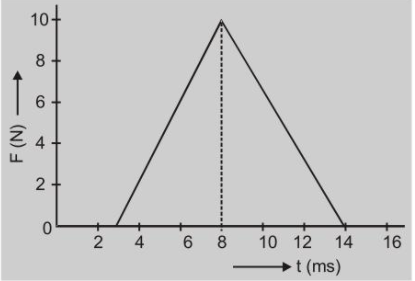 Sol. According to work-energy theorem we have

But according to impulse-momentum theorem

Sol. According to given problem change in momentum of the ball