Diode is a PN junction device. If you want to know about the different types of PN-junction diodes then keep reading. Very much used in a dancing light display of music systems and information boards on railway stations.
In a forward-biased diode, the energy produced by recombination of electrons and holes at the junction can be emitted. If the energy is in the visible region, such a diode is called a light-emitting diode or LED.

A circuit for LED is shown in fig. The brightness can be controlled by $\mathrm{R}_{\mathrm{L}}$.

A PN junction diode made of photosensitive semiconductor is called a photodiode.

In photodiode, provision is made for allowing the light to fall at the junction.

Its function is controlled by the light allowed to fall on it.

In a semiconductor, the electrons jump from the valence band to the conduction band by absorbing energy from some external source of energy.

If this energy is sufficient to break a valence bond, when such light falls on the junction, new hole-electron pairs are created.

The number of charge carriers increases and hence the conductivity of the junction increases.

Fig. shows a circuit in which the photodiode is reverse-biased.

The applied voltage is less than the breakdown voltage. When visible light of suitable energy (hn > forbidden energy gap) is made incident on the photodiode, current begins to flow due to shifting of electrons from valence band to conduction band.

A pn-junction diode in which one of the P-or N regions is made very thin (so that the light energy is not greatly absorbed before reaching the junction) is used in converting light energy to electrical energy. Such diodes are called solar cells. In the solar cell, the thin region is called the emitter and the other base. When a light incident on the emitter, a current in the resistance $R_{\mathrm{L}}$ (Fig.). The magnitude of the current depends on the intensity of light.

Unlike a photodiode, a solar cell is not given any biasing.

By careful adjustment of the concentration of acceptor and do not impurity atoms near the junction, the characters beyond the turn over-voltage become almost a vertical line.

Thus, in this region of its characteristic curve, the reverse voltage across the diode remains almost constant for a large change of the reverse current.

Therefore, a Zener diode is used as a voltage reference device for stabilizing a voltage at a predetermined value.

Zener diodes have been designed to operate from 1 to several hundred volts. In the diodes which are operated below 6V the breakdown of the junction is due to the Zener effect. 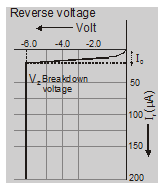 In those operated between 5 and 8V, the breakdown is due to both the Zener effect and the avalanche multiplication.

In general, all diodes which are operated in the breakdown region of their reverse characteristic are known as Zener diodes.

Zener diode is a reverse-biased heavily doped P-N junction diode. Which is operated in the breakdown region.

So, that's all from this article. I hope you get the idea about the Different types of PN-junction diodes. If you found this Explanation helpful then please share it with your friends and social media followers.