Hey, do you want to learn about the Energy band theory in solids? If yes. Then you are at the right place. 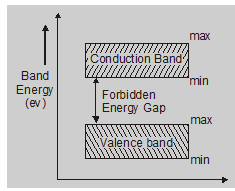 The separation between the conduction band and valence band is known as the forbidden energy gap.

So, that's all from this article. I hope you get the idea about the Energy band theory in solids. If you found this article informative then please share it with your friends.

For a better understanding of this chapter, please check the detailed notes of Electronics Class 12. To watch Free Learning Videos on physics by Saransh Gupta sir Install the eSaral App.