Hey, are you a class 11 student and looking for ways to download NCERT Solutions for Class 11 Biology chapter 18 Body Fluids and Circulation PDF? If yes. Then read this post till the end.

In this article, we have listed NCERT Solutions for Class 11 Biology chapter 18 Body Fluids and Circulation in PDF that are prepared by Kota’s top Doctor’s Faculties by keeping Simplicity in mind.

If you want to learn and understand class 11 Biology chapter 18 "Body Fluids and Circulation" in an easy way then you can use these solutions PDF.

NCERT Solutions helps students to Practice important concepts of subjects easily. Class 11 Biology solutions provide detailed explanations of all the NCERT questions that students can use to clear their doubts instantly.

If you want to score high in your class 11 Biology Exam then it is very important for you to have a good knowledge of all the important topics, so to learn and practice those topics you can use eSaral NCERT Solutions.

In this article, we have listed NCERT Solutions for Class 11 Biology chapter 18 Body Fluids and Circulation PDF that you can download to start your preparations anytime.

Question 1. Name the components of the formed elements in the blood and mention one major function of each of them.

Solution. The components of the formed elements in the blood include:

a) Erythrocytes - It is also known as red blood cells (RBC). It functions in the transportation of respiratory gases in the body.

c) Platelets - They are also known as thrombocytes. They are involved in coagulation or blood clotting mechanism.

Question 2. What is the importance of plasma proteins?

Solution. Plasma is a viscous, straw-coloured fluid which comprises of almost $55 \%$ of the blood. The major proteins in the blood are Fibrinogen, globulins and albumins. Fibrinogen is involved in coagulation or clotting of blood. Albumin is required for the osmotic balance Globulin is involved in the defence mechanisms of the body.

(a) Eosinophils (i) Coagulation

Question 4. Why do we consider blood as a connective tissue?

Solution. Blood is a fluid connective tissue formed from mesoderm of embryo. It is a connective tissue in the form of fluid and comprises of the fluid matrix, plasma and the formed elements. It has many roles which include transport of respiratory gases, defence mechanism, blood clotting, and maintaining osmotic balance.

Question 5. What is the difference between lymph and blood?

Question 6. What is meant by double circulation? What is its significance?

Solution. In human beings, the blood enters the heart twice within a single cycle, and this type of circulation is called double circulation.

The oxygenated blood is carried by the aorta to various parts of the body through the network of arteries, arterioles and capillaries into various tissues. The venules, veins and superior \& inferior vena cava carry deoxygenated blood and transfer it into the right auricle of the body. While oxygen and various nutrients are provided to the tissues, the carbon dioxide is taken away from the tissues through the blood. This is known as systemic circulation.

This type of blood circulation helps in maintaining body temperature, prevents mixing of oxygenated and deoxygenated blood and increases the efficiency of the circulatory system 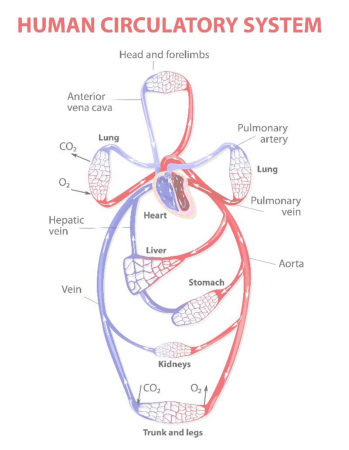 Question 7. Write the differences between :

(a) Blood and Lymph

(b) Open and Closed system of circulation

Solution: a) blood and lymph

b) Open and closed system of circulation Question 8. Describe the evolutionary change in the pattern of heart among the vertebrates.

In amphibians and reptiles (excluding crocodiles), the three-chambered heart is present, which consist of two auricles and one ventricle. Incomplete double circulation is observed in these animals. The right auricle receives deoxygenated blood from all parts of the body, and left auricle receives oxygenated blood from lungs or skin or gills and blood form both auricles enter the single ventricle which pumps out mixed blood.

Birds, crocodiles and mammals possess four-chambered heart, which consists of two auricles and two ventricles. In birds and mammals, the blood from the right auricle enters right ventricle, and from the left auricle to the left ventricle, hence there is no mixing of blood. Hence, they have double circulation.

Question. 9. Why do we call our heart myogenic?

Solution. The heart is myogenic as the normal activities of the heart, such as contractions is autocontrolled. It is carried out by the specialised cardiac musculature known as nodal tissues.

Question 10. Sino-atrial node is called the pacemaker of our heart. Why?

Solution. Sino-atrial node (SAN) is called the pacemaker of our heart as it sets the pace for activities of the heart, such as the contraction and relaxation. It generates the maximum number of action potential per minute, which is $70-75$ per minute.

Question 12. Define a cardiac cycle and the cardiac output.

Where, Stroke volume is the volume of blood pumped by the ventricles during every cardiac cycle.

Question 14. Draw a standard ECG and explain the different segments in it.

Solution. ECG is used to represent the electrical activity of the heart graphically during a cardiac cycle.

A standard ECG wave can be studied as follows: The P- wave of the ECG represents the electric de-polarisation of atria, i.e. it refers to the contraction of atria.

The QRS complex represents the electric de-polarisation of the ventricles, i.e. it refers to the contraction of ventricles, which indicates the beginning of systole.

The count of the number of QRS complex peaks for a minute helps in determining the heartbeat. The peaks of the ECG is usually of the same shape in the individuals, and any deviation in it could be an indication of abnormalities in the heart. Hence ECG has a clinical significance.

If you have any Confusion related to NCERT Solutions for Class 11 Biology chapter 18 Body Fluids and Circulation PDF then feel free to ask in the comments section down below.