Hey, are you a class 12 student and looking for ways to download NCERT Solutions for Class 12 Biology Chapter 2 Sexual Reproduction in Flowering Plants PDF? If yes. Then read this post till the end.

In this article, we have listed NCERT Solutions for Class 12 Biology Chapter 2 Sexual Reproduction in Flowering Plants PDF that are prepared by Kota’s top IITian Faculties by keeping Simplicity in mind.

If you want to learn and understand class 12 Biology Chapter 2 "Sexual Reproduction in Flowering Plants" in an easy way then you can use these solutions PDF.

In this article, we have listed NCERT Solutions for Class 12 Biology Chapter 2 Sexual Reproduction in Flowering Plants PDF that you can download to start your preparations anytime.

Question 1: Name the parts of an angiosperm flower in which development of male and female gametophyte take place.

Question 2: Differentiate between microsporogenesis and megasporogenesis. Which type of cell division occurs during these events? Name the structures formed at the end of these two events.

Both events (microsporogenesis and megasporogenesis) involve the process of meiosis or reduction division which results in the formation of haploid gametes from the microspore and megaspore mother cells.

Solution. The correct development sequence is as follows:

During the development of microsporangium, each cell of the sporogenous tissue acts as a pollen mother cell and gives rise to a microspore tetrad, containing four haploid microspores by the process of meiosis (microsporogenesis). As the anther matures, these microspores dissociate and develop into pollen grains. The pollen grains mature and give rise to male gametes.

Question 4: With a neat, labelled diagram, describe the parts of a typical angiosperm ovule.

Solution. An ovule is a female megasporangium where the formation of megaspores takes place. 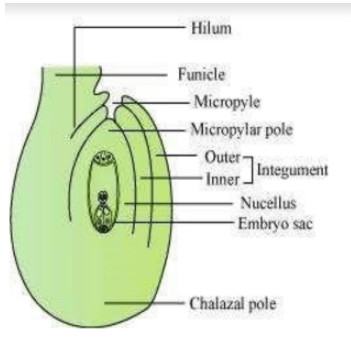 The various parts of an ovule are –

Funiculus – It is a stalk-like structure which represents the point of attachment of the ovule to the placenta of the ovary.

Hilum – It is the point where the body of the ovule is attached to the funiculus.

Integuments –They are the outer layers surrounding the ovule that provide protection to the developing embryo.

Micropyle – It is a narrow pore formed by the projection of integuments. It marks the point where the pollen tube enters the ovule at the time of fertilization.

Nucellus – It is a mass of the parenchymatous tissue surrounded by the integuments from the outside. The nucellus provides nutrition to the developing embryo. The embryo sac is located inside the nucellus.

Chalazal – It is the based swollen part of the nucellus from where the integuments originate.

Question 5: What is meant by monosporic development of female gametophyte?

Question 6: With a neat diagram explain the 7 -celled, 8 -nucleate nature of the female gametophyte. 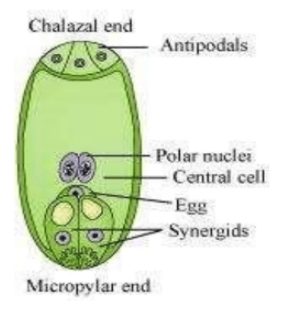 Solution. There are two types of flowers present in plants namely Oxalis and Violachasmogamous and cleistogamous flowers.

Chasmogamous flowers have exposed anthers and stigmata similar to the flowers of other species. Cross-pollination cannot occur in cleistogamous flowers.

This is because cleistogamous flowers never open at all. Also, the anther and the stigma lie close to each other in these flowers. Hence, only self-pollination is possible in these flowers.

Solution. Self-pollination involves the transfer of pollen from the stamen to the pistil of the same flower. Two strategies that have evolved to prevent self-pollination in flowers are as follows:

D In some plants, the gynoecium matures before the androecium or vice-versa. This phenomenon is known as protogyny or protandry respectively. This prevents the pollen from coming in contact with the stigma of the same flower.

The plants which exhibit this phenomenon have the ability to prevent germination of pollen grains and thus, prevent the growth of the pollen tube on the stigma of the flower. This prevents the fusion of the gametes along with the development of the embryo. As a result, no seed formation takes place.

Question 10: What is bagging technique? How is it useful in a plant breeding programme?

Solution. Various artificial hybridization techniques (under various crop improvement programmes) involve the removal of the anther from bisexual flowers without affecting the female reproductive part (pistil) through the process of emasculation. Then, these emasculated flowers are wrapped in bags to prevent pollination by unwanted pollen grains.

This process is called bagging. This technique is an important part of the plant breeding programme as it ensures that pollen grains of only desirable plants are used for fertilization of the stigma to develop the desired plant variety.

Question 11: What is triple fusion? Where and how does it take place? Name the nuclei involved in triple fusion.

Solution. Triple fusion is the fusion of the male gamete with two polar nuclei inside the embryo sac of the angiosperm.

This process of fusion takes place inside the embryo sac. When pollen grains fall on the stigma, they germinate and give rise to the pollen tube that passes through the style and enters into the ovule. After this, the pollen tube enters one of synergids and releases two male gametes there. Out of the two male gametes, one gamete fuses with the nucleus of the egg cell and forms the zygote (syngamy). The other male gamete fuses with the two polar nuclei present in the central cell to form a triploid primary endosperm nucleus. Since this process involves the fusion of three haploid nuclei, it is known as triple fusion. It results in the formation of the endosperm.

One male gamete nucleus and two polar nuclei are involved in this process.

Question 12: Why do you think the zygote is dormant for sometime in a fertilized ovule?

Solution. The zygote is formed by the fusion of the male gamete with the nucleus of the egg cell. The zygote remains dormant for some time and waits for the endosperm to form, which develops from the primary endosperm cell resulting from triple fusion. The endosperm provides food for the growing embryo and after the formation of the endosperm, further development of the embryo from the zygote starts.

(a) Hypocotyl and epicotyl;

Question 14: Why is apple called a false fruit? Which part(s) of the flower forms the fruit?

Solution. Fruits derived from the ovary and other accessory floral parts are called false fruits. On the contrary, true fruits are those fruits which develop from the ovary, but do not consist of the thalamus or any other floral part. In an apple, the fleshy receptacle forms the main edible part. Hence, it is a false fruit.

Question 15: What is meant by emasculation? When and why does a plant breeder employ this technique?

Solution. Emasculation is the process of removing anthers from bisexual flowers without affecting the female reproductive part (pistil), which is used in various plant hybridization techniques.

Emasculation is performed by plant breeders in bisexual flowers to obtain the desired variety of a plant by crossing a particular plant with the desired pollen grain. To remove the anthers, the flowers are covered with a bag before they open. This ensures that the flower is pollinated by pollen grains obtained from desirable varieties only. Later, the mature, viable, and stored pollen grains are dusted on the bagged stigma by breeders to allow artificial pollination to take place and obtain the desired plant variety.

Solution. Parthenocarpy is the process of developing fruits without involving the process of fertilization or seed formation. Therefore, the seedless varieties of economically important fruits such as orange, lemon, water melon etc. are produced using this technique. This technique involves inducing fruit formation by the application of plant growth hormones such as auxins.

Question 17: Explain the role of tapetum in the formation pollen-grain wall.

Solution. Tapetum is the innermost layer of the microsporangium. It provides nourishment to the developing pollen grains. During microsporogenesis, the cells of tapetum produce various enzymes, hormones, amino acids, and other nutritious material required for the development of pollen grains. It also produces the exine layer of the pollen grains, which is composed of the sporopollenin.

Question 18: What is apomixis and what is its importance?

If you have any Confusion related to NCERT Solutions for Class 12 Biology Chapter 2 Sexual Reproduction in Flowering Plants PDF then feel free to ask in the comments section down below.