Hey, are you a class 12 student and looking for ways to download NCERT Solutions for Class 12 Biology Chapter 5 Principles of Inheritance and Variation PDF? If yes. Then read this post till the end.

In this article, we have listed NCERT Solutions for Class 12 Biology Chapter 5 Principles of Inheritance and Variation in PDF that are prepared by Kota’s top IITian Faculties by keeping Simplicity in mind.

If you want to learn and understand class 12 Biology Chapter 5 "Principles of Inheritance and Variation" in an easy way then you can use these solutions PDF.

In this article, we have listed NCERT Solutions for Class 12 Biology Chapter 5 Principles of Inheritance and Variation PDF that you can download to start your preparations anytime.

Question 1: Mention the advantages of selecting pea plant for experiment by Mendel.

Solution. Mendel selected pea plants to carry out his study on the inheritance of characters from parents to offspring.

He selected a pea plant because of the following features.

(c) In pea plants, cross pollination can be easily achieved by emasculation in which the stamen of the flower is removed without affecting the pistil.

(d) Pea plants have a short life span and produce many seeds in one generation.

Question 2: Differentiate between the following −

(a) Dominance and Recessive

(b) Homozygous and Heterozygous

Solution. (a) Dominance and Recessive

(b) Homozygous and Heterozygous

For example, if an organism is heterozygous at four loci with four characters, say Aa, Bb, Cc, Dd, then during meiosis, it will segregate to form 8 separate gametes. 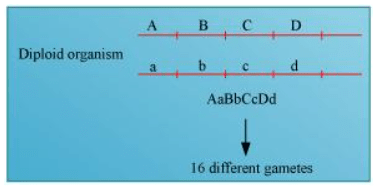 If the genes are not linked, then the diploid organism will produce 16 different gametes. However, if the genes are linked, the gametes will reduce their number as the genes might be linked and the linked genes will be inherited together during the process of meiosis.

Question 4: Explain the Law of Dominance using a monohybrid cross.

Solution. Mendel's law of dominance states that a dominant allele expresses itself in a monohybrid cross and suppresses the expression of recessive allele. However, this recessive allele for a character is not lost and remains hidden or masked in the progenies of $F_{1}$ generation and reappears in the next generation Solution. Test cross is a cross between an organism with unknown genotype and a recessive parent. It is used to determine whether the individual is homozygous or heterozygous for a trait. 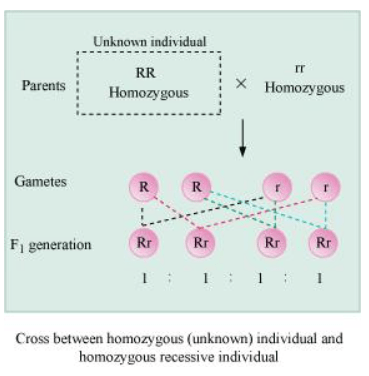 Question 6: Using a Punnett square, work out the distribution of phenotypic features in the first filial generation after a cross between a homozygous female and a heterozygous male for a single locus. 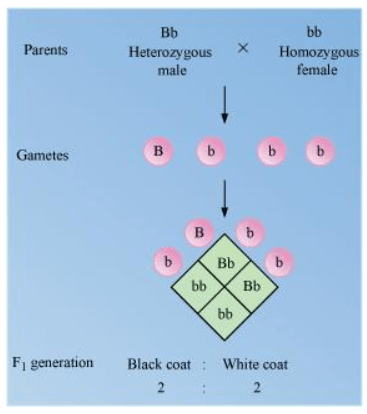 Question 7.When a cross in made between tall plants with yellow seeds (TtYy) and tall plant with green seed (TtYy), what proportions of phenotype in the offspring could be expected to be

(b) Dwarf and green.

(a) three tall and green plants

(b) one dwarf and green plant Question 8 Two heterozygous parents are crossed. If the two loci are linked what would be the distribution of phenotypic features in $\mathrm{F}_{1}$ generation for a dihybrid cross?

For example, a cross between yellow body and white eyes and wild type parent in a Drosophila will produce wild type and yellow white progenies. It is because yellow bodied and white eyed genes are linked. Therefore, they are inherited together in progenies. Question 9: Briefly mention the contribution of T.H. Morgan in genetics.

Solution. Morgan's work is based on fruit flies (Drosophila melanogaster). He formulated the chromosomal theory of linkage. He defined linkage as the co-existence of two or more genes in the same chromosome and performed dihybrid crosses in Drosophila to show that linked genes are inherited together and are located on X-chromosome. His experiments have also proved that tightly linked genes show very low recombination while loosely linked genes show higher recombination.

Question 10: What is pedigree analysis? Suggest how such an analysis, can be useful.

Solution. Pedigree analysis is a record of occurrence of a trait in several generations of a family. It is based on the fact that certain characteristic features are heritable in a family, for example, eye colour, skin colour, hair form and colour, and other facial characteristics. Along with these features, there are other genetic disorders such as Mendelian disorders that are inherited in a family, generation after generation. Hence, by using pedigree analysis for the study of specific traits or disorders, generation after generation, it is possible to trace the pattern of inheritance. In this analysis, the inheritance of a trait is represented as a tree, called family tree. Genetic counselors use pedigree chart for analysis of various traits and diseases in a family and predict their inheritance patterns. It is useful in preventing hemophilia, sickle cell anemia, and other genetic disorders in the future generations.

Question 11: How is sex determined in human beings? A cross between homozygous parents will produce progeny with AB blood group. 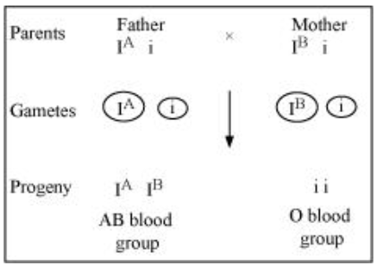 Incomplete dominance is a phenomenon in which one allele shows incomplete dominance over the other member of the allelic pair for a character. For example, a monohybrid cross between the plants having red flowers and white flowers in Antirrhinum species will result in all pink flower plants in $\mathrm{F}_{1}$ generation. The progeny obtained in $\mathrm{F}_{1}$ generation does not resemble either of the parents and exhibits intermediate characteristics. This is because the dominant allele, $R$, is partially dominant over the other allele, r. Therefore, the recessive allele, $r$, also gets expressed in the $F_{1}$ generation resulting in the production of intermediate pink flowering progenies with Rr genotype. Question 14: What is point mutation? Give one example.

Question 15: Who had proposed the chromosomal theory of inheritance?

Question 16: Mention any two autosomal genetic disorders with their symptoms.

It is an autosomal disorder that is caused by the trisomy of chromosome 21.

If you have any Confusion related to NCERT Solutions for Class 12 Biology Chapter 5 Principles of Inheritance and Variation PDF then feel free to ask in the comments section down below.